The Daily Grind of the Orphanage 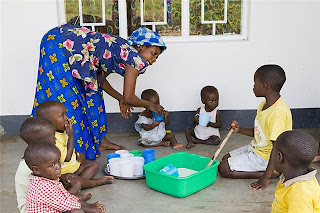 I promised some of you – and myself – that when I had access to a computer, I would update the blog about the orphanage. Now, I’d like to backtrack and in the upcoming blogs, I will introduce you to some of the children and their life at the orphanage, tell you how our money was used and some ideas I have for future fundraising. I’m practically bursting at the seams to share my idea...but, first things first.

There are four houses here and in each one there are almost 20 people – the houses were built with the donations of a Christian group in the UK. The boys are kept separate then the girls, and there are many more boys then there are girls. The kids range in age from newborns up to 20 years old - the older kids have spent their entire lives in the orphanage.

The older children (and by older, I mean anyone older then 5) help with chores. I was there during their school break and all day long, the children would work. They cook, clean, do laundry and feed the babies. How strange it is to see a 7-year-old girl pick up a crying two-week-old and stick a bottle in its mouth (while she is sucking her own thumb). None of them complained about chores.

The house where I slept is where most babies are kept. At the time, there were about 8 babies. The youngest was Baby Steven, born Christmas Day. He was brought to the orphanage on Boxing Day when someone found him in a garbage dump.

In each house, there is a House Mother. These women work non-stop. There is a perpetual cycle of laundry, dishes, floors to scrub, cooking, babies to bathe, bottles to prepare....It’s almost impossible to explain the amount of work that goes into caring for 70 children (without the convenience of washing machines, dishwashers, microwaves, etc).

I tried my best to help out where possible – peeling matoke (bananas with a thick sap that make them difficult to peel), grinding groundnuts with mortars for stew, hanging laundry, digging out weeds in the yard, washing dishes (constantly washing dishes) and sweeping the floor. Every morning, I would make all of the baby beds. One morning, I held baby Rafiki George for three hours trying to soothe him. The poor boy was taken to hospital just a few days later with illness that had not been determined while I was still there.

In the evenings, the children would gather in one house for prayers, singing, dancing and drumming. Afterwards, they would huddle around a TV that was donated to them. There is no cable, but they have a donated DVD player and it runs off a solar-powered generator. It’s their one small luxury.

Some of the older kids would sit out front of the house talking – as older kids always do. I would try to join them most nights. They wanted to know what life was like in Canada, did I go to university, or how often did I plait my hair (!!!). I wanted to know what they dreamed to do, what school was like, where their fathers were and what they planned for the future. These evening were some of my favourite times at the orphanage.

I’m home now and my days are getting back to normal – work, internet, exercise, walks with Shelby, visiting friends and family. I’ve had three caramel apple spices from Starbucks since I’ve been home Meanwhile, I know nothing has changed there. The perpetual cycle of work and struggling to survive and get ahead continues....
***
Posted by Karen Snider at 5:21 PM