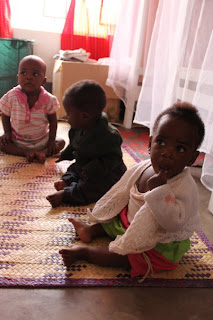 The babies
When I arrived, the home was still grieving the loss of three children - two were babies - who died in December due to illness, most likely malaria. The children died just two weeks before Christmas.

I stayed in the home where the majority of babies were kept – in all, I think there were about 6 of them under the age of 2. At least one baby stays in each of the houses as the House Mothers try to share the workload of caring for the youngest at the orphanage.

When I was there, the youngest was Baby Steven – he was born on Christmas Day and on Boxing Day he was found in a garbage dump and brought to the orphanage.

Baby Abigail was baptized on the last Sunday I was there, and after her baptism her House Mother brought her to the hospital. I’m still not sure what’s happened to her or why she was ill.

Baby Rafiki George who I cradled one morning for hours trying to stop his crying was also brought to the hospital that same day.

But, the day after the baptism, a new baby, Baby Jimmy, was brought home from the hospital. I didn’t even know about him! He had been brought to the orphanage before I arrived, but immediately admitted to hospital and was only returning now. I got to meet the sweet little baby, wrapped up in blankets, sleeping soundly and overall, doing well.

Another baby, we determined while I was there, is quite possibly deaf – or maybe autistic. We tried to bang pots to catch his attention, but the child is completely unresponsive. He never cries, never moves – never makes a sound. If tests reveal his hearing is fine and he is not autistic, then it is likely that the child is in shock after losing his mother – sadly, not uncommon for many of these babies.

If it is determined he has serious health issues, I’m not sure how the orphanage will manage the medical costs involved....?

The babies are so vulnerable – and sadly, many of them do not make it because they are so ill when they are brought to the orphanage. However, most do survive and they live in the orphanage until they have grown and finished school. They are incredible children.
Posted by Karen Snider at 6:54 PM