Vero has been accepted to Law School!

When I first visited the orphanage nearly 3 years ago, Veronica was 16 years old with dreams to go to law school.

At the time, she was the third highest scoring student in her district, scoring 98 percent on her report card (her teachers encouraged her to score 100%). Aside from her grades, Vero was naturally curious, outgoing and obviously ambitious. She’s an incredibly bright young woman and there was no doubt in my mind that she would succeed.

The problem, however, was that there was no funding in place for her to afford to go to university. 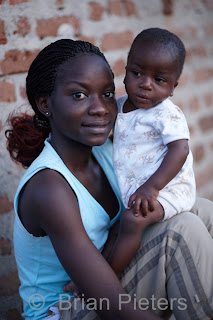 And so, it was Veronica who inspired Monica and I to create the Nzirambi Education Fund with a promise to not only pay for Vero’s university, but to raise funds to pay for all of the children to have access to higher levels of learning.

We received word this weekend that Veronica has realized her dream! She has been accepted to law school at one of the top universities in Uganda.

Veronica is the first of all of the 85 children at the orphanage to be accepted to university – and in that she naturally becomes a role model to the younger children showing them that if they put their minds to it, they can achieve whatever it is they want.

Vero’s acceptance to university is no small feat. This is a girl who, when she was just one year old, was brought to the orphanage by her brother. Her mother had died of AIDS and the father could no longer look after Vero, the youngest of his children and his only daughter. She has grown up at the orphanage and considers the children there to be her brothers and sisters.

When I was last in Uganda I asked her why she wanted to study law. She told me it’s because she wants to help others – in her country lawyers resolve problems, help businesses do well and also reduce crime. In Uganda, a lawyer doesn’t specialize in one area, so she is prepared to practice criminal law, property law and so forth.

Over the next couple weeks, we’ll be in touch with Vero to determine the fees she will need. We will be looking to cover school fees, books and boarding.

She starts school in September.

Thank you everyone for continuing to support what our fundraising efforts. With your help, we are able to truly make a difference in a child’s life.