A special thanks for a “twitterific” gift 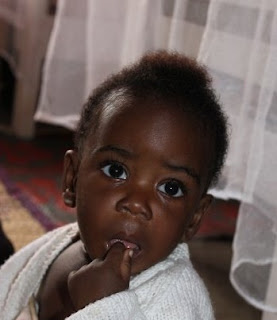 For those of you on Twitter, you probably know about Scott Stratten, aka @unmarketing. He's “kind of a big deal on Twitter” and he tweets a lot - in fact, he’s tweeted more than 40,000 times.

I’ve had the opportunity to work with Scott on a few occasions. It was his birthday a few weeks ago and I thought that as a proud father, Scott would appreciate the greeting cards that we have been selling to raise funds for the orphanage.
I knew I would see him at Digital Leap (hosted by Stephen Thomas Ltd, Ted Hart and The Royal Conservatory ), where he was a presenter, so I gave him the card then.

Later that evening, Scott told me (in 140 characters) that Digital Leap organizers are making a donation to the charity of his choice as a gift for his presentation. He decided to give his donation to the orphanage.

The donation came at a good time. Monica and I have begun filling out the forms to obtain charitable status and the night before Digital Leap, we were especially overwhelmed. When we got Scott’s message, it was a reminder that we’re doing the right thing. That good people want to help us help these children.

So we’ll keep pushing to raise funds for the orphans. Our goals are reasonable: we aim to raise $10,000 every year for the next three years. Our funding will go toward an education fund to pay for the children’s secondary and post-secondary education. Without higher levels of education, these children won’t break free of the cycle of poverty they are currently in.

And they deserve the chance. These kids are so strong – some of them have lived their entire lives in the orphanage. There are 77 children at the home, ranging in age from newborns to teens. The mere fact that these children have survived the poverty - that over the years has left many of them ill with malaria or malnourished for long periods - is a feat in itself.

By supporting the education fund, not only are we giving the children a chance at success, but we are alleviating the stress of the day-to-day grind on the orphanage. That means there will be more funding for medicines, nutritious foods and salaries for the heroic housemothers who care for the children 24 hours a day.

A special thank you to Scott and Digital Leap for helping these children reach their goals.
Posted by Karen Snider at 4:37 PM