The Children's Hospital in Uganda 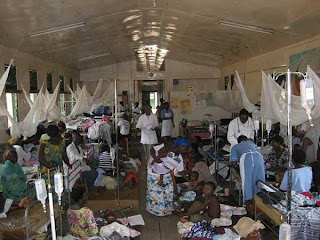 With Mother's Day in Canada coming, I thought to share these photos that I just received from the orphanage. Being a housemother in Uganda takes on an entirely different meaning to motherhood.

When a child is sick, not only are there hospital fees to pay, but either Dorothy (the founder) or one of the housemothers has to be in hospital with the child. Attached is a photo of the children's ward at Kagando Hospital for you to have some idea as to what it is like.

Three more housemothers have been employed since the beginning of the year to ease the strain when children are ill and to assist in looking after the ever increasing numbers of children.

Milly (orphanage co-founder) also feels that it is right that the housemothers who have babies sleeping on their beds at night - and two other little ones in their room - should also have a time to rest during the day. This seems quite reasonable to me!

This luxury is not really possible at the moment, but it is something that she is aiming for by continuing to increase the number of housemothers in the future.

By supporting our Education Fund, which will fund secondary and post-secondary levels of education, we are alleviating the burden and stress on the orphanage so that more funding can be directed where it's needed - medicines for the children, nutritious foods and even a pittance so the housemothers can take even just a few hours off to themselves.
Posted by Karen Snider at 11:54 AM