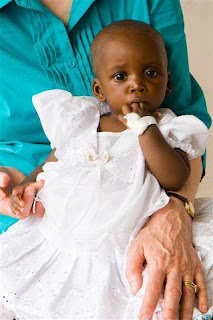 In the weeks before I arrived at the orphanage, the worst happened. Three boys; two babies and one 10-year-old boy died in December, all of them had malaria.

The children had just moved into a new home on 30 acres of land where soon they will learn to farm and become self-sufficient. But, at the time, there was a major problem with mosquitoes that they didn’t know how to control.

The deaths were a shock to the orphanage – never before had they lost so many children at once.

The orphanage hired a nurse to help keep watch of the children on a daily basis and provide them with anti-malarial medication. It prevented any more children from dying. But, it did not stop the illness.

When I got to the orphanage, the women and children were still struggling with the loss of their boys.

There was no question that the mosquitoes were bad in the area. We all slept under bed nets, but the real problem was that the children have their play time at the end of the day when the chores are done – usually at dusk when the mosquitoes come out.
They play soccer in the field with no protection from the bugs.

I honestly don’t know how the babies contract it – they are kept inside almost all day long and they sleep under bed nets.

What we learned while I was there was that the mosquitoes were breeding in the latrines at the back of the buildings. The orphanage, quite simply, was not putting enough of a special solution down the drain to kill them. So, they started adding more to kill off the bugs.

Even still, it’s a problem they will struggle with always. The best we can do is raise funds for the orphanage so that they can purchase the medications they need that prevent malaria from becoming deadly.
Posted by Karen Snider at 10:15 AM