**World Malaria Day,instituted by the World Health Assembly in May 2007, is a day for recognizing the global effort to provide effective control of malaria

I remember this time last year writing with such desperation about the problem with malaria at the orphanage. The children had recently moved into a new home on a large plot of rural land. Malaria, however, was rampant at their new location. 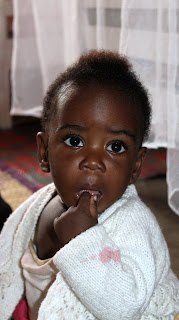 orphanage in January 2010. Three of the children died that year because of malaria – one boy was ten, the other two were just babies.

The deaths were a shock to the orphanage – never before had they lost so many children at once.

On 33 acres of rural land neighbouring a national game reserve, you can imagine how bad the mosquitoes were. The children were getting bit while playing soccer at dusk, or sitting on the stoop of their houses after the sun went down.

The real problem, however, was that mosquitoes were breeding in the latrines. It was discovered that the House Mothers – possibly in an attempt to be frugal- were not pouring into the latrines enough of a special fluid that kills off the mosquitoes.

Once this problem was resolved, the situation did improve. While there continues to be some cases of malaria, it has not been nearly as bad. This year when I visited the orphanage, not one person was suffering from malaria (although the flu was making the rounds).

The situation at the orphanage is just a sample of what goes on across the country.

Malaria will always be a part of life in Uganda.

The Malaria Control Programme of Uganda states that: “malaria is responsible for more illness and death than any other single disease in Uganda. Those with low immunity, such as pregnant women, children under five years and people living with HIV/AIDS- are particularly

Malaria kills about one million people every year mainly, children under the age of five in sub-Saharan Africa. Uganda has the third highest rates of infection in Africa.

The experts are trying to do something about it.

When it comes to treating malaria, the World Health Organization is recommending a new form of treatment that is safer to use than that which is normally used (quinine). I guess it’s not unusual though that the problem is that the new treatment (artesunate) costs up to three times more.

But, the one thing I’ve learned from being involved in the orphanage is that we can make a difference. By supporting charities that focus on malaria in Africa, you are helping to find a cure, test vaccines, ensure everyone has a bed net to sleep under and access to medications when they need it.
Posted by Karen Snider at 9:42 AM