On my last night at the orphanage, I went to visit House Mother Jesca and the babies in House #5. To my surprise, when I walked in, one of the little girls – about 2.5 years old – was running around the house and then vaulting onto a mat laying on the floor. She’d roll over in giggles and then a second toddler, Aaron, would run and jump on top of her. The two would then scramble back onto their feet and repeat the routine, squealing with laughter. 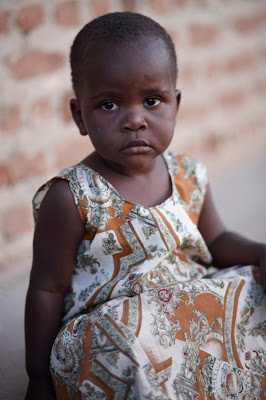 I said this was a surprise because the little girl was Baby Jane. Truth is, in the days I was there, I didn’t see Jane so much as smile, let alone laugh or play. She observes the others with such a serious face – her eyebrows creased and lips pursed tightly together. Even last year, I remember that she was such a stoic baby.
She’s really quite sullen!
I even asked House Mother Jesca if the child every smiled. She told me: “She has her moments.” And, on my last night there, she was clearly having one of those moments.
It was a wonder to watch the change in her, if only for an evening.
Baby Jane was brought to the orphanage on Feb. 12, 2009 by a probation officer and her uncle. Her parents had died, and the uncle was trying to care for her, but did not have the means. The child was brought to the orphanage naked and starving. She was so frail, the House Mothers couldn’t exactly determine her age, but assumed she was about 15 months old at the time. She had four teeth and was not even crawling.
She’s so plump and healthy today that it’s impossible to imagine her in the skeletal state that she arrived in.
Baby Jane is a reminder of the scope of what the orphanage does. They accept children who have been abandoned or left behind. Some of their parents die from many of the causes that continue to plague much of the continent – AIDS, malaria, maternal mortality. Some parents are killed or injured in car accidents because the roads are just so unsafe.
Too many are there because their families couldn’t care for the children properly and the children are malnourished and ill. And there are even more sad cases of children who were simply abandoned on the streets or at garbage dumps by their families. These stories are indicative of just how desperate the plight of some families can be.
The women at the orphanage love the children as if they are their own, helping them to cope with the trauma they’ve experienced at such young ages. They are raised to think of their House Mothers and the other 85 children at the orphanage as their own mothers, brothers and sisters.
The orphanage gives hope to these children who otherwise may not have stood a chance at surviving. And now the kids aren’t only surviving – they are flourishing.
*Photo by Brian Pieters
Posted by Karen Snider at 8:11 PM