I recently received some sad news that two of the babies from the orphanage, Caroline and David, have passed away. Both of these babies came to the orphanage after I was there in January, so I didn’t get to know them.

David
David was born Feb. 20 of last year and when he was just four months old, his mother became mentally ill and unable to care for him. With seven other children, David’s father was not taking good care of him.

A sickly severely malnourished baby, he was regularly in and out of the hospital for his first four months. A nurse, having heard of the Nzirambi Orphans Talent Development Cen

tre made arrangements with the probation officer and the orphanage for him to live there. Slowly, after six months he began to recover, showing strength in his legs by kicking and playing.
Just recently, doctors began to suspect that David had spina bifida. He came down with pneumonia and, despite the best efforts of the house mothers, doctors and nurses, he didn’t survive.
Caroline
Caroline was born November 18, 2009 and brought to the orphanage in June after her mother died of malaria. Again, the father was unable to adequately care for his child and Caroline was removed from his care and brought to the orphanage after being hospitalized for pneumonia. 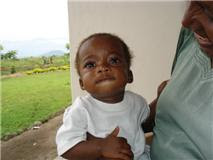 This little girl became quite ill over the summer and required a blood transfusion. However, none of the hospitals in the area had blood supplies to donate. In Uganda, a person must have an HIV test every six months in order to donate blood and none of the house mothers had this test done and could not donate blood. They decided to transport baby Caroline to the Kampala hospital, but she died along the way.
The reality
The reality of the situation is that neither of these children likely would have died had they been given the care we can expect for our children in Canada. The housemothers and hospitals did everything they could, but there are so many limitations, especially when a child is born into these incredibly stressful, life endangering situations.
Hope
In so many ways, it’s frustrating to hear that two of our children have passed away. But, it’s not time to lose hope. There are more than 80 children there now, some now in their late teens, haven grown up and survived these difficult circumstances. The death of these little ones inspires me even more to stay focused and continue my goal to raise $10,000 per year for the next three years so that we can give the older children a real chance through education.
Thank you so much for your steady support.
Posted by Karen Snider at 4:19 PM