Baby Carolyn and a New Playground at the Orphanage 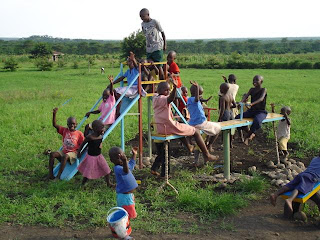 I just got an update that the orphanage has another new baby. This one is named Carolyn. She is five-months-old and her mother died of malaria. A welfare officer came to the orphanage to ask that they accept her because her family was unable to cope with her.

This means there have been four new babies to the orphanage in the last few months. Another child’s mother died during childbirth; one mother was mentally ill; and yet another was born to teenage parents who did not have the means to care for the child.
The orphanage is growing at break-neck speed. People in the community are becoming more familiar with it and so the number of children is growing. These are children who otherwise would have been left for dead or left in families that could not care for them.
The UK sponsors are beginning to build a 5th little house to accommodate the orphans and the house mothers. So while their family grows, thankfully, so is there living space growing!

I also received these new photos that show the children playing on their new playground equipment donated by the local Rotary Club. The equipment was once in a public space, but it was getting vandalized. The children lucked out when the Rotary Club decided to give it to the orphanage. These children don't get to play very much and they don't have a lot of toys. So this is a very big deal!
Posted by Karen Snider at 3:01 PM